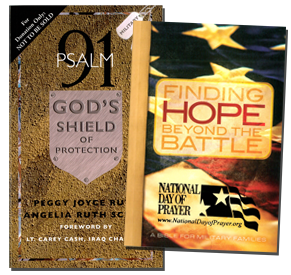 Finding Hope Beyond the Battle

The world of a military family changes when a service member is deployed. Families find themselves alone having to deal with fear, anger, and depression while the spouse they’ve counted on for love and support serves thousands of miles away.

In order to help these families walk through these challenges, Calvary Fellowship Fountain Valley has partnered with the National Day of Prayer Task Force to offer the Military Family Support Kit – which includes a special edition Finding Hope Beyond the Battle (NIV Bible) and a Psalm 91 “Warrior’s Prayer” devotional.

Finding Hope Beyond the Battle brings you stories of military spouses and the fear, anger, loneliness, and other challenges they have faced. This special edition NIV Bible, developed specifically for military families, points to our greater hope beyond all personal and political battles. Study notes will help you explore the unfolding drama of God’s story, summarized in five acts. It also has a dictionary/concordance included.

Psalm 91 has been called “the Warriors Prayer” and has been adopted by many of our military units as a source of strength and comfort as they serve. This devotional is a valuable resource that goes through the verses one by one, explaining the meaning of the words. Testimonies are also offered by troops and family members sharing stories of Godly protection they received as they leaned on His word.

If you are a soldier, family member of a soldier, or a military chaplain, these resources are made available by the generosity of friends and partners who support the ministry of the National Day of Prayer Task Force.

ET2 Lakeith Haslam
“I just received the books and must say that they are awesome! I have handed most of the out and I believe that it will make a huge impact on the people of this ship. God is good and he is working even while we are out to sea. Continue to keep us and all of our brothers and sisters in arms. God bless you!”

CH (LTC) Bill Hartman, Deputy Chaplain, 81st Regional Readiness Command
“I am an Army Chaplain who talks to hundreds of Army Reserve Soldiers right before they leave for Iraq and Afghanistan. I have the freedom to ask their religious convictions and I always recommend that they make a habit of daily devotions to counteract Satan’s spiritual/psychological warfare against them. I don’t know how many of the devotionals you could send, but I could easily give 500 away before Christmas. Thanks and God bless you for what you’re doing for our military men and women going into harm’s way.”

CH Gil Stadley
“I just returned from Okinawa and saw in person how the books were being put to good use. I saw them personally handed out in chapel service in which I was privileged to speak. Chap Biadog has given copies to many others and that has resulted already in some GI’s coming to church or planning to come to church. He was also in the Philippines and was able to deliver some copies including a copy to one of the highest ranking Filipino officers. You will only know in eternity how you have blessed the recipients. Thanks again.”